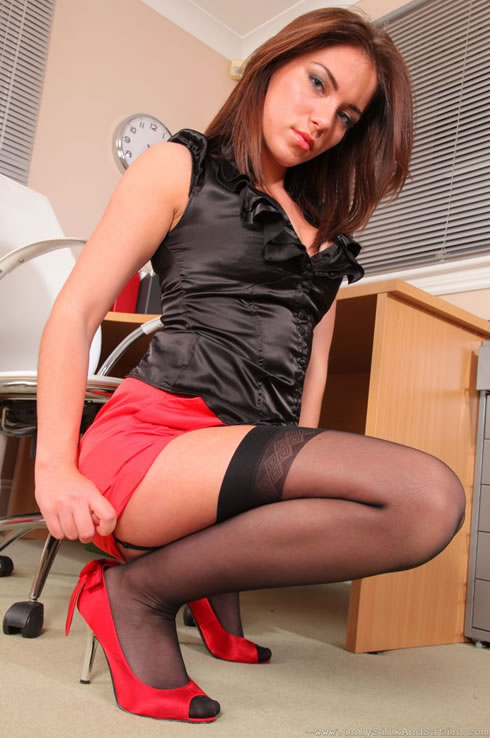 Natalie Blair has been an office assistant to her boss (an accountant) for two years now and has not seen a raise since she began working for him. This made the busty brunette babe very distressed as she thought her looks would guarantee her some more income. Natalie came to the end of her line and decided to seduce her boss with her sexy red panties and lacey bra. Of course she wore some silky black thigh high stockings and some silky top and skirt to complete her look before giving him the strip tease of his life. Natalie was called into his office and he began to give her orders when Natalie began running her finger along her cleavage distracting him as she looked at him coyly. Natalie then began to slowly unbutton her silky black top and revealed her red bra to him and there was nothing said as her boss was shocked and could only stare in delight at Natalie giving him a very seductive strip tease.

He backed up to his door without taking his eyes off of Natalie and locked the door, as his eyes were as wide as saucers while he ogled the brunette babe taking her clothes off. Natalie smiled sexily and wiggled out of her shiny skirt and revealed her sexy thigh high stockings and left on her lingerie and heels for him to enjoy. As Natalie watched his expression grow to a huge smile Natalie began to give him her request for a salary raise and even had all of the paperwork ready for him to sign so that she had his word in writing. Now that is one smart brunette babe! Natalie Blair got what she wanted and all she had to so is show off that banging body in silky stockings and high heels!