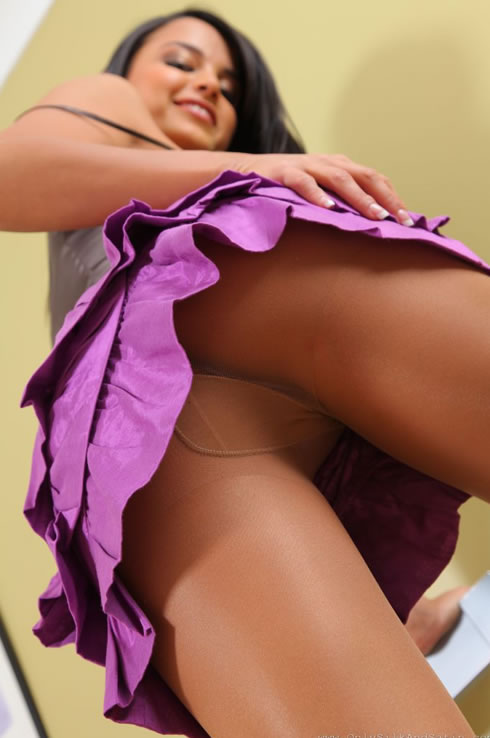 Bebe is one gorgeous model and hot brunette babe that the folks at Only Silk and Satin just had to add to their collection of sexy models sporting hot stockings. Bebe was discovered by an Only Silk and Satin producer and he had to offer the raven-haired beauty a job as a lingerie model the moment he laid eyes on her. Bebe was very shy and wasn’t sure how much skin she wanted to reveal in these erotic lingerie photos but was later convinced when they told her how much money she would be making. Bebe happily accepted the job and soon became an Only Silk and Satin model and loved the attention she was getting from a growing fan base. Bebe looks amazing in this hot lingerie photo gallery as she dons her silky pantyhose and satiny camisole

Bebe is a busty babe and has got all the right curves in all the right places so it’s easy to imagine what she might look like in the nude and that’s all of the fun right there! Bebe has an all-natural appeal once the camera is pointed in her direction and gives off a sultry look that exudes pure sexiness in these very steamy Only Silk and Satin pictures. Her beautiful ass can bring tears to anyone’s eyes and Bebe seems to love showing off her gorgeous body. Her shyness has begun to abate and now she seems to be coming out of her shell some more. The more confidence she builds with each silk and satin image she takes the hotter the erotic pictures become. If you’re a big follower of hot brunette babes in stockings then you’re going to simply fall into lust with Bebe!